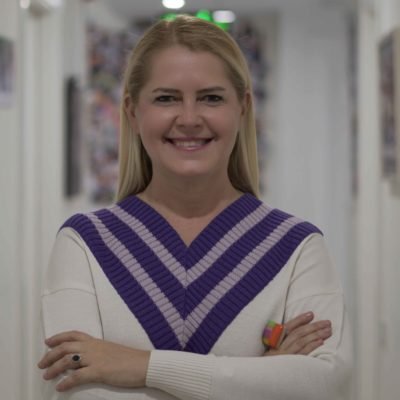 She is graduated from İstanbul University Psychology Department. She did her Master’s Degree in England Keele University. She is a psychodrama therapist and trainer. She is one of the founders of Istanbul Psychodrama Institute (1996), and Istanbul Birth Academy (2010). She is both founder and president of Hand in Hand for Birth Association (2015), and vice president of ISPPM International Prenatal Psychology and Medicine Association. Neşe Karabekir is an IDA Certified Birth Preparation Instructor – Head instructor of Doula and Birth Psychotherapist trainings. She has been working as an individual and group therapist for 29 years. She is one of the instructors of the First Touch Erasmus Plus Project, which is continued until 2022. She still continues to do individual and couple psychotherapy.

Birth from the Baby’s Perspective

Is birth a trauma, existence itself, a transition or a kind of death? During this presentation, we wanted to approach this subject, which has been discussed for years, only from the perspective of the baby.

Birth is still considered to be “the birth of the mother” in many cultures. Questions such as “How will you give birth, where will you give birth, have you planned your birth?” are asked to a woman who is pregnant and preparing for childbirth. But birth is actually the existence of the baby, not the mother-to-be. Of course, with traditional discourses, both men and women are born again as parents, but the main thing is the transition of the baby from one world to another. It is definitely a process, a complete transition, sometimes difficult, sometimes easy, sometimes with tears, sometimes with laughter, sometimes with medical difficulties. Undoubtedly, the perception and experience of this transition by the parents, baby, and delivery team will be different.

In this presentation, we aimed to concentrate only on the baby’s point of view. Of course, what we will present cannot be a concrete and qualitative study as it is from the point of view of the parents and delivery team.

The prenatal and perinatal perspective takes us to studies of the fetus and embryo. This presentation will be on the potential effects of the exact moment of birth on the infant in later life.

Prenatal Psychology will also take us to the developmental processes of the baby in the mother’s womb.

The womb-mother’s womb, which is a true “first home”, is the place where the baby first met. The walls of the uterus, the water it is in, the placenta, the umbilical cord, everything is new and first for him. Therefore, his first bond starts against them. Everything that she perceives to be experienced in the womb during pregnancy is meaningful for the baby and is recorded in the body (Verny,T. 2008)

According to Chamberlain (2003), babies in the womb; They have senses such as touch, sight, hearing, feeling heat, cold and pain, sucking, swallowing, recording, and feeling the mother. This prepares them for both birth and after birth. This special preparation in the womb is very important for the baby’s first spontaneity with the mother. Thus, mother and baby experience the process of doing, being together, and feeling together for the first time (Karabekir.N. 2021).

The moment of birth, on the other hand, is based on the first encounter of the mother, father and baby, regardless of the type of birth. There are many delivery teams in the world to make this encounter the most respectful for everyone. The presentation will also touch on the Philosophy of Birth without Wish and the Birth without Wish Birth team, which has been going on in Turkey since 2010 (Coker, 2015). Inconsistent birth teams, consisting of doctors, midwives and birth psychologists, work not only for the mother and father, but also for the birth team and especially the baby. The goal is for everyone to come out of the birth without regret. Whether the mode of delivery is vaginal, cesarean, water or water birth (Somer, 2020), respect for the mother and especially the baby should always be at the forefront.

However, some medical interventions may be unavoidable at birth. Each intervention will bring some features that will affect the whole life of the baby. Below you will find a summary of the 1998 article by William Emerson, former president of APPPAH (Association for Prenatal and Perinatal Psychology and Health). 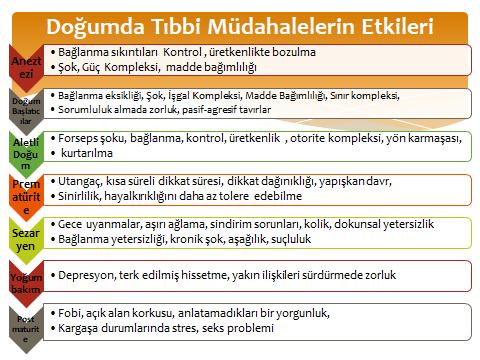 Effects of Medical Interventions in Birth

As a result, as reported by Porges, (2011) in the Multiple Vagus theory, if babies are welcomed peacefully by both their parents and first-time greeters, doctors and nurses, they develop social adaptation instead of fight-flight-freeze systems, and this adaptation reduces the stress that will be transferred to their whole lives affect the management process. Since the way the baby is born and the practices applied during birth affect adult life, we need to make it a habit to look at births from the baby’s perspective. The only way to do this is to bring real parent-baby-friendly practices to all hospitals and to train birth teams accordingly. Wishless births will bring a wishless future.